In this tutorial you will learn how to successfully characterize a 3DS Max Biped character in MotionBuilder.

Before you can begin using the character animation features in MotionBuilder you will need to characterize your Biped. The process involves 3 main steps:

Correctly aligning the Biped in a T-Pose is possibly the most important part of the whole characterization process. When you active the Characterize option, MotionBuilder uses the position of the Biped at that moment as the start pose for any animation, remapping or poses you do. Any errors at this stage will seriously affect the amount of editing work you have to do later so it’s worth spending a bit of time to make sure all the joints are aligned as accurately as possible. To help with accuracy, try to use a skinned Biped rather than just a skeleton. The mesh will make it much easier to see if the joints are aligned correctly especially on the fingers and feet.

Before you can begin animating the Biped in MotionBuilder, you must define it’s hierarchy using the character Mapping List so MotionBuilder understands which joints are the legs, arms, head, etc. This process is called Character Mapping. The Mapping List creates a link between the joints in the Biped and a set of predefined nodes that exist in all characterized characters inside MotionBuilder. These nodes are used to build the Control Rig when animating, remap animation between characters, and retarget motion capture from the Actor asset.

There are 2 ways to complete the character Mapping Process for a Biped character: Automatic and Manual. Automatically completing the Mapping List using a Skeleton Definition Template can only be completed successfully if you have NOT changed the joint names of your Biped (changing the name of your Biped is OK). If you have chosen to rename the Biped joints, you will need to  manually add each joint to the Mapping list. Once the mapping list has been completed manually, it is possible to create a “custom character” or “Skeleton Template” file which can be used to automatically complete the Mapping List for other Bipeds that use the same joint naming convention.

If you have used your own custom joint names and need to complete the list manually, the Manual Character Mapping section of this post will explain how to do it.

Once you have completed the Mapping List you can activate the defined character map to “Characterize” the Biped. MotionBuilder will then recognise it as a Character that can be animated with a Control-Rig, Actor asset or another character. When you characterize a Biped, MotionBuilder uses the structure you have defined in the Mapping List and the Biped’s current position as the start pose for any animation, remapping or poses you create; this is why it is very important to align the T-Pose as accurately as possible. 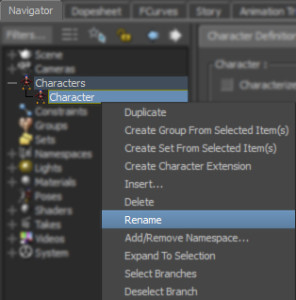 It is possible to edit the Biped once it has been characterised if you find it isn’t working as you expect.